A patent is an exclusionary right granted by the Commonwealth to the patentee. The right that’s granted is the right to stop others from practising the invention that’s the subject of the patent.

When a patent is granted the patent office in the country in question issues a “Deed of Letters Patent”.  In Australia, IP Australia is the government body responsible for checking that patent applications comply with the Patents Act. If it finds that the application is compliant then it will grant the patent and issue its own Deed.

The extent of the IP right conferred by a granted patent is defined by a series of concise statements called ‘claims’ that appear at the end of the patent specification. In the event of infringement litigation a Court will closely examine the claims to determine if their scope is broad enough to read on to an allegedly infringing product. If the product in question falls within the scope of at least one claim then patent infringement will be deemed to have occurred.

Apart from the claims, patent specifications usually have an initial section explaining the problem that the inventor has set out to solve. There then follows a section, typically having wording similar to the claims, summarising the critical elements of the invention.

Immediately before the claims there usually appears a description of a preferred version of the invention in sufficient detail for a person “skilled in the art” to understand and perform the invention.

The term of a standard Australian patent is 20 years. Renewal fees are payable on the fifth anniversary of the patent application date and annually for the rest of the term.

To read about the patent examination process, click here.

What sort of inventions can be patented?

Section 18(1)(a) of the Australian Patents Act 1990 requires that a patentable invention must be a manner of manufacture within the meaning of section 6 of the Statute of Monopolies, an English statute of the 17th century.

The Courts’ view of what constitutes a “manner of manufacture” has developed over time. Patents were initially granted for new types of apparatus or machines. From the mid 19th century however Courts recognised that industrial methods or processes may also comprise patentable subject matter.

An invention that is patentable subject matter in one country may not be in others.

What are the requirements for a patent application to be granted?

What sort of information must be provided?

In order to prepare a patent application you’ll need to provide as much information as possible explaining:

How Much do patents cost?

Typically between about $4,000 and $5,500 to prepare a provisional patent application for a reasonably straightforward invention. You should budget for $8,500 to $11,000 overall to obtain a granted Australian patent over a period of four years. Costs will be greater if the invention is particularly complex or if difficulties are encountered during examination of the patent application.

Renewal fees are payable for both innovation and standard patents.

How long does it take to prepare a patent application?

If you have more specific questions about patenting then just call or email us. We’ll be happy to answer your questions. 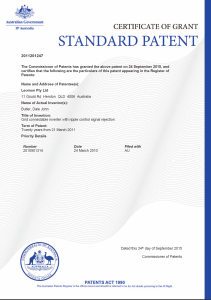 “Thank you for filing in Australia on our behalf. I’m very impressed. That was an extremely efficient turn-around.”